What Happens at Christmas by TA Williams Blog Tour
& Competition!
(scroll to bottom of post for competition) 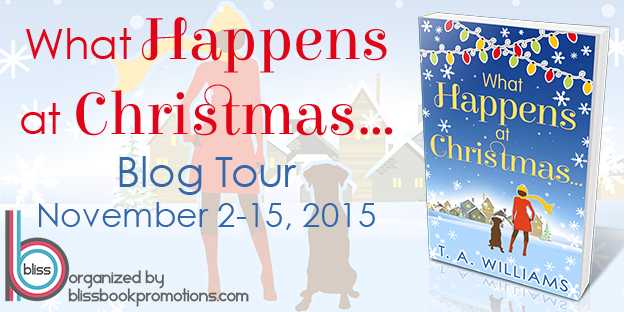 For the perfect Christmas…
When career-girl Holly Brice learns that her estranged father has died, she decides to take a trip down memory lane and find out about the man she never knew. Arriving in the sleepy little Dartmoor village, she’s shocked to discover that she’s inherited the cosy little cottage she remembers so fondly, a whole load of money –and her father’s adorable dog, too!
Head to snow-covered Devon!

And as the first snowflakes begin to fall and Holly bumps into her gorgeous neighbour, Jack Nelson, life gets even more complicated! Men have always been off the cards for high-flying Holly, but there’s something about mysterious writer Jack that has her re-thinking her three-date rule...
A fabulous, feel-good festive read, perfect for fans of Debbie Johnson and Carole Matthews. 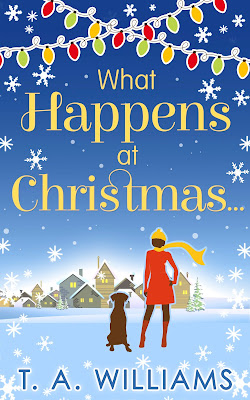 All in all, Holly had a reasonable night’s sleep. The only interruption came at around three o’clock in the morning, when she was woken by a noise. By this time, moonlight was flooding into the room and she got the shock of her life when she saw the bedroom door swing open. She was already backing away to the far side of the bed, looking for a weapon of any description, when the dog’s head appeared.

The dog must have interpreted her use of his name as an invitation, as he proceeded to climb up onto the bed, where he dropped on top of her with a sigh. She had to struggle for a few moments to push him off her and down onto the floor again. ‘No, Stirling. Bad dog.’ He sat down beside the bed and stared at her. She could see two little moons reflected back at her in his big eyes. ‘Go downstairs, Stirling.’ He didn’t move. ‘Oh, for crying out loud please go back to your bed, would you? I want to go to sleep.’ She closed her eyes and lay back down again, hoping that he would take the hint. She counted silently up to sixty and then risked opening her eyes a fraction. His face was still there, his gaze unblinkingly fixed on her.

‘Oh, God…’ She swung out of bed and reached for a pair of shoes. It was cold in the room, although the thick feather duvet had kept her warm in bed. She retrieved her jumper from the chair and led the dog down the stairs. In the kitchen, it was warmer, but the stove was now cool enough to touch. She went over to the table, lit one of the candles and looked down at the dog, who was still staring at her impassively.

‘Listen Stirling, we are not going out for a w… W, A, L, K. Got it? It’s the middle of the night and we both should be asleep. Go in your basket.’ She had to repeat it a few times and add a few gestures, but finally he got the message and climbed into his bed. He slumped down, but his eyes were looking so mournful that eventually she grabbed a cushion and settled on the cold stone floor beside him. She stroked his head and he stretched out a huge paw and pressed it against her. She caught hold of it in her other hand and they stayed like that for some minutes, as his eyes gradually closed and he settled down.

As she sat there, looking at him, she reflected that only a few months ago, her father might have been here, doing the same thing. Maybe that was what was disturbing Stirling. She looked around the room, but there were few personal objects on display. Her dad’s jacket still hung on the back of the door, a strong pair of walking boots peeked out of the broom cupboard and a cricket bat leant against the window seat. She closed her eyes and conjured up the image of his face from the photo beside his bed. Seeing it had brought back so many memories; from a sandy beach holiday, to a trip to the hospital when they thought she had broken her arm. Her dad’s loving, comforting face had been there with her on those occasions and so many others and then, just like that, he had disappeared from her life, forever. 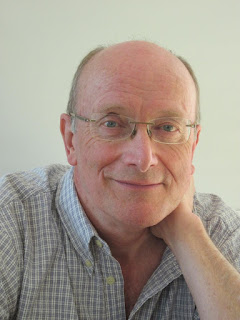 Firstly, my name isn't T A. It's Trevor. I write under the androgynous name T A Williams because 65% of books are read by women. In my first book, "Dirty Minds" one of the (female) characters suggests the imbalance is due to the fact that men spend too much time getting drunk and watching football. I couldn't possibly comment. Ask my wife...

I've written all sorts: thrillers, historical novels, short stories and now I'm enjoying myself hugely writing humour and romance. Romantic comedies are what we all need from time to time. Life isn’t always very fair. It isn’t always a lot of fun, but when it is, we need to embrace it. If my books can put a smile on your face and maybe give your heartstrings a tug, then I know I’ve done my job.

I‘ve lived all over Europe, but now I live in a little village in sleepy Devon, tucked away in south west England. I love the place. That’s why you’ll find leafy lanes and thatched cottages in most of my books. Oh, yes, and a black Labrador.

I've been writing since I was 14 and that is half a century ago. However, underneath this bald, wrinkly exterior, there beats the heart of a youngster. My wife is convinced I will never grow up. I hope she's right.