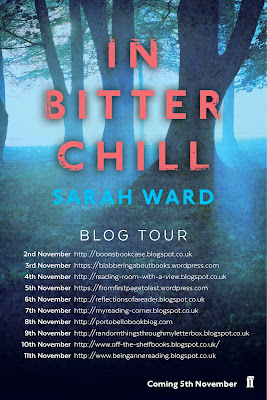 I was very lucky to go to The Book Club TBC 1st birthday party last week and when I found out that Sarah Ward was going to be there (In Bitter Chill was the book I was reading at the time!), I just had to take my copy to be signed and also meet up with the author and have a chat about the book! 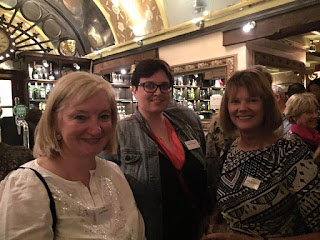 (Me on the left, Sarah Ward in the middle and my very good friend and Guest Reviewer Julie Williams on the right)

Bampton, Derbyshire, January 1978. Two girls go missing: Rachel Jones returns, Sophie Jenkins is never found. Thirty years later: Sophie Jenkins's mother commits suicide.
Rachel Jones has tried to put the past behind her and move on with her life. But news of the suicide re-opens old wounds and Rachel realises that the only way she can have a future is to finally discover what really happened all those years ago.
This is a story about loss and family secrets, and how often the very darkest secrets are those that are closest to you. 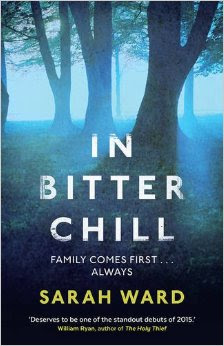 This story starts on 20th January 1978 when two schoolgirls, Rachel Jones and Sophie Jenkins were abducted on their way to school. Rachel manages to return home, but Sophie is never found.

This story grabs you straight away as it goes from the present day with Rachel still trying to come to terms with what happened back in 1978 and how her job as a genealogist comes back to haunt her own family tree!

Meanwhile, Sadler and Connie are detectives who are trying to solve the case of Rachel and Sophie's abduction and trying to find out if there was a connection to Yvonne Jenkin's suicide, until there is another death. Was it suicide or murder.................

This is a great debut novel from Sarah Ward. Lots of twists and turns and a great twist that I must admit, I had to read a couple of times to realise the connection!!

Thank you to Sarah Ward and Sophie at Faber for sending me a couple of copies of this book and thanks Sarah for signing them and one I shall be doing soon for a giveaway!