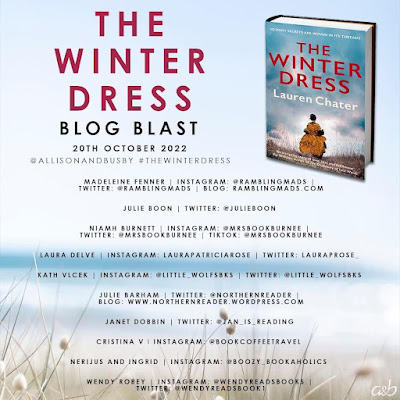 I'm delighted to be a part of the Blog Blast for The Winter Dress by Lauren Chater which is published today. You can read my review below.
Blurb
Jo Baaker, a textiles historian and Dutch ex-pat is drawn back to the island where she was born to investigate the provenance of a 17th century silk dress. Retrieved by local divers from a sunken shipwreck, the dress offers tantalising clues about the way people lived and died during Holland's famous Golden Age. Jo's research leads her to Anna Tesseltje, a poor Amsterdam laundress turned ladies’ companion who served the enigmatic artist Catharina van Shurman. The two women were said to share a powerful bond, so why did Anna abandon Catharina at the height of her misfortune? Jo is convinced the truth lies hidden between the folds of this extraordinary dress. But as she delves deeper into Anna’s history, troubling details about her own past begin to emerge. On the small Dutch island of Texel where fortunes are lost and secrets lie buried for centuries, Jo will finally discover the truth about herself and the woman who wore the Winter Dress.
Review
Jo Baaker lives in Sydney, Australia, having moved there as a child when her parents died to live with her aunt. She originally came from a Dutch island called Texel.
She is a historian with a special interest in textiles and when she was headhunted to look at a dress from the 17th century that was brought to the surface from a shipwreck near her birthplace, she had to pack her bags and get on a flight back to Texel.
The dress belonged to a girl called Anna Tesseltje who came from Amsterdam, but what was she doing on the ship in the first place? this is what Jo needs to find out and also to find out more about the exquisite gown.
This is a dual timeline story (which I love) and the attention to detail and research the author did was very thorough and based on the real discovery of a shipwreck in 2014 in Texel.
A good read for historical fiction fans.
Posted by Boon's Bookcase at 08:34