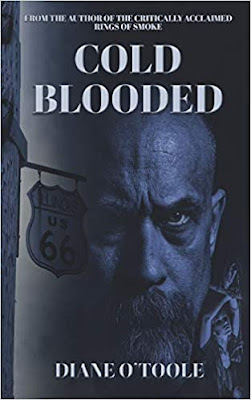 I was asked by the author a few months ago now to review this book which is a sequel to Rings of Smoke which I reviewed a couple of years ago now on the blog. I did read it at the beginning of the year, but sadly, life (and death) got in the way of things in my life and so Boon's Bookcase had to take a back seat.

I can only apologise to the lovely, patient author, but hope that my review was worth the wait!

Blurb
Whilst carrying out research into murders across the pond, Harris’ partner, Detective Constable Jones, discovers several bizarre killings along the famous Route 66, which leads him to believe there may be a link with the believed-dead serial killer, Leonard Fitch.
What follows is a cat and mouse that will shock on a scale never imagined and horrify beyond your darkest dreams.
In the long-awaited sequel to Rings of Smoke, discover what happens when evil evolves.

Review
Serial killer Leonard Fitch was dead. Killed by his own hands in a fire in his house. It was rather that than being caught by the police for a string of kidnappings and murders and that was the last thing Fitch wanted after all the trouble he went to with stalking his victims and mutilating them.

The police can't believe their luck that the notorious Fitch, who was a very well respected Consultant Neurologist, is dead, after putting all the pieces together to catch him.

Meanwhile, in the USA a woman is murdered in a very similar way to the Fitch killings and a cold chill goes down the back of DS Harris who has been brought in to see if there is a resemblance to the murders in the USA with the ones carried out by Fitch here in the UK.

DS Harris and his boss, DC Mike Jones, travel to America to see if the murders are in fact, copycat killings, or by some twist of fate, could Fitch have been resurrected from the flames of his house after all and be responsible for yet more murders?

All they know, is that Harris and Jones must get to the bottom of this case before the killer strikes again...or is it already too late?

This is a very well written sequel to Rings of Smoke and I must admit, when I finished the first book, I was wondering if there would be a sequel, but couldn't really predict how it would come about knowing that Fitch was dead, but this one has been very cleverly written and totally believable.

It doesn't make for comfortable reading at times, there are some gruesome scenes, but that makes it all the more readable!

Thank you once again to Diane O'Toole for her patience and support over the last few months and I would thoroughly recommend both of these books (as long as you have a strong stomach!).

To order Rings of Smoke from Amazon click here