A Letter from Paris
by
Louisa Deasey
BLOG TOUR 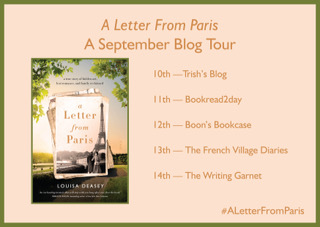 It's my turn on the Blog Tour for A Letter from Paris by Louisa Deasey and what a fabulous cover it is!


A Letter from Paris is a memoir for Paris lovers everywhere. When Louisa Deasey receives a message from a Frenchwoman called Coralie, who has found a cache of letters in an attic written about Louisa’s father, neither woman can imagine the events it will set in motion.


The letters, dated 1949, detail a passionate affair between Louisa’s father, Denison, and Coralie’s grandmother, Michelle, in post-war London, and take Louisa on a journey to discover who her father - who had died when she was six - really was.
She uncovers his secret service in WWII, his integral role in the international art scene, and his career as a writer, swept under the carpet by a family that considered him a black sheep. Her journey of discovery takes her all the way to the City of Lights and connects her with an extended family she never knew existed and a stepmother she thought she’d lost forever. 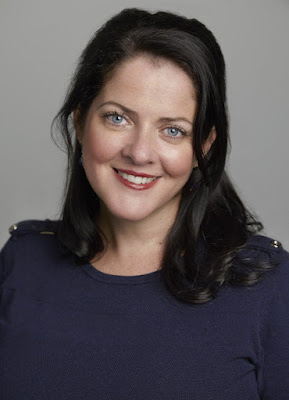 Extract
It was late on Saturday night when Coralie first contacted me. Despite a sudden summer storm, my inner-city apartment was stifling. I’d returned from a friend’s house for dinner. An amazing cook, she’d made a small group of us seafood and salads, and we’d talked into the night as we waited for the storm to settle. Dinner at Carmen’s was the highlight of an awful week.
In the space of seven days, I’d attended a funeral, been to the emergency ward, and had to call the police because my downstairs neighbour had gone off the rails.
I’d quit my job at the University a fortnight earlier after an impossible situation, and the prospect of starting from scratch depressed me. The job had been so ideal when I’d started, and ended so awfully, leaving a sad hollow in my stomach, a resistance to giving anything else my all.
I wanted to write, maybe freelance again — but I had to come down from the year-long stint at the University, the disappointment I felt at how that had all turned out. There was no space in my head to plan and dream — everything felt a bit scary. I wondered if there was something wrong with me, for not being able to ‘hack’ the situation at the University, if only to keep earning a regular income.
I felt caught between worlds, unsure of who I was or what I wanted, restless but tired. Anxious and disorientated. Disappointed in myself, somehow.
I sat trying to remember who I was, and what I wanted — if I could trust myself to want something again.
A Facebook ‘message request’ appeared on my phone as my neighbour’s shouts of abuse reached up from her balcony below.
30 January 2016
Hello Louisa,
I hope you won’t mind me contacting you in such an unsolicited way.
My name is Coralie. I live in Paris, France. My grandmother, Michelle Chomé, recently passed away and we found in her apartment a stack of letters written during the year 1949 to her parents in Paris. At the time she was an au pair in London.
In these letters she speaks of an Australian man called Denison Deasey. She met him on the train to London — he was there that same year with his sister. It seems he took her on some very special outings around London ... she was very smitten with him.
Are you related to Denison Deasey? Again, I hope I am not disturbing you in any way ...
Denison. His name was a shock and a surprise, like the stranger who typed it. I hadn’t thought about dad on any conscious level for such a long time. His story was a scar that still tugged and pulled whenever it was exposed.
Seeing his first name and reading of him was an unexpected visitation. It brought him back, it called him in. I realised just how much I missed him without knowing him, how much I still wanted to know.
I returned to that long-familiar longing, the knowing but not knowing, the unfinished story. Unsure what to hope for, unsure if I should.
I’d only reactivated my Facebook account that morning after a two-week break, to stop getting alerts from University pages. Even odder, I’d then changed my profile picture to an old picture I’d taken at the Louvre, an unexpected pang to return to France having surged over me as I sat up in bed after waking. I’d been trying to think of something that excited me, since I was feeling so lost.
I have to go to Paris again this year, I’d written in my diary.
But here was a message — from Paris. It seemed like a confirmation. I had to get back there. But how?