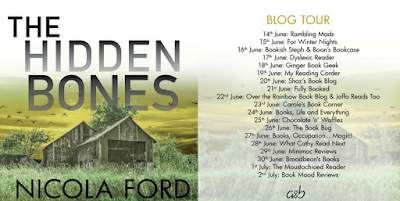 It's my turn today to host the Blog Tour for The Hidden Bones by Nicola Ford. This sounds a fabulous read, so another one that is going to be bumped up my TBR pile! Meanwhile, I have an extract for you which is in fact, Chapter Two and I have included a link for you to read the Prologue and Chapter One. Enjoy....

‘Take a look!’ Muir stabbed his finger at the sheet of A4.
David glanced down at the paper lying on his head of department’s desk without speaking.
‘Well!’
‘Well what?’ To everyone except Muir himself and the vice-chancellor, the bald-headed Glaswegian was known as the Runt. He was renowned for both his complete disregard for anyone or anything other than his own future prospects and his apparent obliviousness to the universal detestation with which he was regarded by other members of the department. The VC had parachuted him into the chair of archaeology over the tops of the heads of several better qualified candidates – David included. But it wasn’t personal jealousy that was fuelling the Runt’s ire this morning. Today’s topic of conversation was David himself.
‘Don’t play games with me, Barbrook. You won’t like the consequences.’
‘Is that supposed to be a threat?’
‘I don’t need to make threats.’ He gesticulated at the sheet of paper that lay between them. ‘The figures speak for themselves.’
Muir seemed to have acquired his management style from old Jimmy Cagney films. It was all David could do to stifle his urge to laugh. Normally he wouldn’t even try, but something in the Runt’s demeanour this morning told him he’d be wise to suppress his natural inclinations. He picked up the paper and made a show of examining it. In reality, he was only too well aware of the contents of the departmental email. It demonstrated beyond a shadow of a doubt that he had brought in significantly less research funding than any of his colleagues in the department.
‘Well! Don’t you have anything to say? You might be determined to spend your entire academic career in the gutter, but I’m damned if I’m going to let you drag the rest of us into it with you. I won’t have it.’
David replaced the email on the desk and settled himself into the sleek leather chair that Muir reserved for favoured guests. He could see that his choice of seat hadn’t improved the Scotsman’s humour. ‘Look, can we drop the amateur dramatics?’
‘How dare you—’
Before he could finish his sentence, David raised his hand. Starting from his chin and working its way upwards across his balding pate, Muir’s face flushed a vibrant shade of pink. For a moment, David thought the Scot was going to have some sort of seizure. ‘I could sit here and listen to you outlining my manifold failings, but frankly I’m tired of playing that scene. So why don’t I save us both the pain of enduring unnecessary time in one another’s presence. There is absolutely nothing wrong with my academic credentials; my submissions for the last research assessment exercise scored higher than anyone else in the department. I’m not some simple-minded dullard. I know the game has changed. Research scores are only a means to an end. We both know that the bottom line is cash.’
Muir made no effort to contain his sarcasm. ‘Well, glory be – he’s seen the light. Now what exactly do you propose to do about it?’
David was well aware that from the moment Muir had set foot in the department he’d viewed him as nothing more than an irritating tick whom he had every intention of crushing underfoot. But thus
far he’d failed to do so. And David had every intention of ensuring he remained firmly embedded under the Runt’s skin.
His adversary leant back in his chair, arms folded, drumming the fingers of his left hand against his right forearm, anticipating victory. It was clear from the Scot’s face that he had absolutely no idea what was coming.
‘I have British Heritage project funding to the tune of half a million pounds.’
‘Pull the other one, Barbrook. You haven’t managed to pull together a viable funding application in the whole of the three years I’ve been here.’
‘Well, I have now.’
‘And exactly what is this fictional funding for?’
‘To analyse and publish the Hungerbourne archive.’
Muir’s mouth broke into a self-congratulatory smile. His target was within range. ‘You’re a fantasist, Barbrook. The Hungerbourne archive went up in smoke – in much the same way that I intend to see that your academic career does, unless you can provide me with some genuine evidence that you’re pulling your weight in my department.’
David reached into the bag that he had placed by his chair. He extracted its contents and slapped them down on Muir’s desk. Before the Runt had a chance to respond, David turned the hardback notebook through one hundred and eighty degrees so that the Scot could read the fading black ink on its tattered cover.
Muir glanced down. There was no mistaking the words on its label, but they clearly weren’t what he was expecting. Hungerbourne Barrow Cemetery Excavation Diary 1973. G. Hart.
Muir opened the book and began leafing through it. He looked up, his eyes boring into David’s. ‘Where did you get this?’
‘Hungerbourne Manor – along with . . .’
‘Why didn’t I know about this?’
Muir knew full well what the answer was. David didn’t dignify it with a response. If he’d told the Runt that he’d found the Hungerbourne archive, he would have insisted he head up the project himself.
David picked up the notebook and, placing it carefully back in his bag, turned to leave.
As he opened the door, Muir said, ‘Make no mistake, Barbrook. One more fuck-up, just one, and it will be the last thing you do in this department.’
David closed the door behind him without a backward glance.

If you want to read the Prologue/Chapter One then click on the link below:-

http://www.allisonandbusby.com/booksample/the-hidden-bones-chapter-sample.pdf
Posted by Boon's Bookcase at 06:30