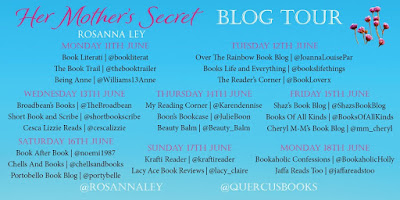 Blurb
For many years Colette has avoided returning to her homeland - the magical island of Belle-Île-en-Mer in Southern Brittany - afraid to confront the painful memories she left behind. She is living on the Cornish coast when she hears about her mother Thea's failing health and realises that the time has come for her to go home. But can Colette ever forgive Thea for what she has done?
Despite Colette's wariness, romantic Belle-Île still fascinates her. She takes on the running of her mother's flower shop and makes friends with Élodie from the Old Lighthouse where Thea once worked as a nanny and with the enigmatic Étienne who shares Colette's mixed feelings about the island. As Thea opens up to her for the first time, Colette finds herself softening and being drawn back into the landscape of her past. But can Belle-Île also be a part of her future?
The ghosts of that past still linger. What happened all those years ago and how did it cause the rift between mother and daughter? It becomes clear that the beauty of Belle-Île hides a devastating family secret - one that Colette is determined to unravel at any cost.

It's my turn on the Blog Tour for Her Mother's Secret by Rosanna Ley. This is the first novel I have read by this author, but have interacted with her on Twitter and Facebook and she is lovely! She also lives in my favourite part of the world, Bridport in Dorset! I would like to say thank you to Anne Cater and Quercus books for sending me a copy of the book and you can find my review of this lovely book below.

Review
Colette has received a letter to say that her mother, Thea, has Leukaemia and that she must return home to the island of Belle-Île-en-Mer before it's too late. It isn't an easy decision for Colette to make as she and her mother have been estranged for many years and she has her fiancé Mark to think about. How will he react to her just upping sticks and returning home indefinitely to help her mother and to keep the little florist shop going that her mother built up from scratch?

Colette's mother Thea knows she doesn't have very long left and wants to make amends not only with Colette, but with Élodie and Jacques, the children she looked after until a bitter disagreement with their mother Mathilde and Thea is sent away disgraced and wondering what she is going to do with the rest of her life.

Meanwhile as Colette is returning to the island to see her mother, Etienne is also back on the island to finalise things following the death of his own mother. He too is finding it difficult being back and memories of his childhood almost prove too much for him. Will a chance meeting with Colette, who is going through similar feelings as him, be able to convince him to stay a while and see what Belle-Île-en-Mer can offer?

Obviously by the title of the book, you can imagine there are secrets and ghosts that Colette has to deal with when she returns to care for her mother, but I thought I had worked out what the "secret" was, but even I didn't seem that one coming!!

This is the first book I have read by Rosanna Ley, but with her exquisite detail, I will definitely be reading more from her. This is quite a long book, but justified in my opinion as the precision to detail is amazing and the amount of research it must have taken about the location, certainly shines out in this story. I thoroughly enjoyed it and would certainly recommend this book. A great summer read!