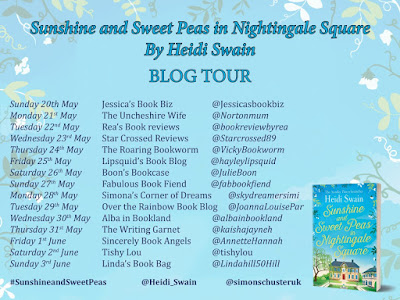 I'm delighted to be a part of the Blog Tour for Heidi Swain's new book Sunshine and Sweet Pease in Nightingale Square. I have met Heidi a couple of times and she is a lovely lady and lives in a fabulous part of Norfolk that I can't wait to visit! Today, I have an extract for you so sit back and enjoy an extract. By the way, I love the title!

'Are you sure you’re all right, Kate?’ David asked as our
honeymoon flight finally touched down and I twisted in my
seat to catch my first glimpse of an Italian sunrise. ‘I know
she said something to you.’
‘Honestly,’ I said, shaking my head and dismissing the harsh
words my mother had used to warn me that my marriage
would last six months, if I was lucky. ‘I’m fine. It’s nothing.’
‘But you were late to the church,’ David persisted in spite
of my reassurance. ‘Very late.’
‘I’ve already told you,’ I laughed, reaching for his hand and
kissing it. ‘That was down to Dad dithering about. He was
more nervous than I was.’
David nodded.
‘Did you think she’d finally got to me?’ I asked, halfjokingly.
‘I hope you didn’t think she’d made me change
‘The thought did enter my head as the seconds began to
tick by,’ he admitted with a boyish grin.
‘Then you’re more deluded than she is,’ I tutted. ‘I love
you, David and no amount of mithering from my mother
could ever change that.’
It was true. I loved the man in the seat next to me body
and soul. I had from the very first moment I laid eyes on
him. Yes, he had a dubious relationship history but I knew he
wasn’t the same person any more. Unfortunately, my mother
didn’t share my belief, but had she paid half as much attention
to the impeccable present as she did to the promiscuous past,
she would have seen for herself just how well- suited we were.
David hadn’t so much as looked at another woman since
our relationship had turned from casual to serious and sitting
on that flight, poised to explore Rome, Venice and beyond,
I could see both my marriage and my career comfortingly
stretching out ahead of me. David and I were to be partners
both in our lives and our work in the antiques trade. Granted
we had each chosen to make sacrifices to make our relationship
work, but we were both equally determined to make a
success of it all.
‘She still doesn’t know you like I do,’ I said consolingly,
‘but she will. In time.’
David didn’t look convinced.
‘I just wish I could make her see how much I love you,
Mrs Kate Harper.’ He burst out, more serious all of a sudden,
‘I just want her to understand that I would never hurt you,
that this old leopard really has changed his spots.’
‘Hey,’ I cut in, feeling giddy at the sound of my married
name, ‘less of the old, thank you very much! There aren’t
that many years between us.’
David was not to be distracted from making his heartfelt
declaration.
‘No,’ he said, ‘I mean this, Kate. You’re the best thing
that’s ever happened to me. You’ve been a breath of fresh air
since the first moment I clapped eyes on you and I would
never, ever do, or say, anything that would hurt you or
make you doubt me. I don’t care what anyone else thinks of
us, all I need to know is that you trust me with every bit of
your heart.’
I closed my eyes as he tenderly cupped my face in his hands
and brushed his lips lightly against mine. I had never felt so
happy, so loved and cherished. I held tight to that moment
and locked it away for safekeeping.
‘I trust you,’ I whispered, looking deep into his eyes.