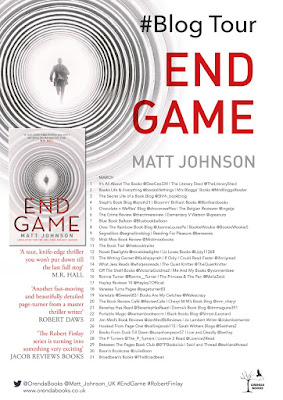 Today, it's my turn to host the Blog Tour for End Game by Matt Johnson with thanks also to Anne Cater for asking Boon's Bookcase to host. I have an extract for you, so enjoy......


An hour later, with the arrest paperwork complete, we had handed Costas over to the local CID and were heading back to our office at New Scotland Yard. We’d wanted to talk to him about his alleged involvement with prostitution, but the evidence of his dealing in stolen goods had now taken priority. Our questions would have to wait.

I had the result of an important interview to think about, although Nina and Matt seemed more interested in talking about their discovery in Costas’s upstairs bedroom. We’d been travelling for several miles before Nina noticed I wasn’t joining in the conversation.

‘Have you absolutely no idea if you passed the selection board, Finlay?’ she asked as she swung the car into the offside lane and raced towards the junction. The traffic signal was just changing to amber and, as was typical of her style of driving, Nina was determined to beat the lights. We made it, just.
‘None at all,’ I said, as I started to breathe again. ‘I even had a sneaky look through the boss’s correspondence tray yesterday. There was nothing; no clue.’

Matt leaned over my shoulder from the back seat. ‘It went well though, I heard. And it can’t have done you any harm that you just completed the Hostage Negotiator course. Most people who do that training are earmarked for promotion.’

‘True enough, but there aren’t many spots for Chief Inspectors this year, and my time at Combat Stress won’t have helped. So, to be honest, I’m not too hopeful.’

‘It was a shame they held the board so close to you coming back to work,’ said Nina. ‘If there’d been a decent gap…’
‘What’s done is done,’ I snapped, instantly regretting my lack of patience.
Nina was being sympathetic, and I wasn’t showing much appreciation.
‘So, will they let you stay in the department as a DCI, or will you have to go back to being a wooden-top?’ she asked calmly, having either not noticed or politely chosen to ignore my rudeness.
‘I don’t know that, either.’
‘Jenny will be pleased … if you pass, I mean. Especially now you’ve an extra mouth to feed.’

I shrugged. Nina was right. The extra pay would help, especially as there was no chance Jenny would be going back to work any time soon.
She was enjoying being a new mother again, and our daughter Becky loved having a little sister.

Nina interrupted my thoughts. ‘Well, you’ve done your courses now.
So, technically speaking you’re a proper DI. And, if you don’t mind me saying, you’re not a bad one, either. I’ve worked with a lot worse, believe me.’ She jabbed a thumb towards the rear seat and laughed.
‘Bugger off, Nina,’ said Matt, feigning anger. ‘Fancy a job writing parking tickets do you?’

I didn’t respond, but I appreciated Nina’s words. It had been a tough year; one that I was glad was behind me. For now, all my thoughts were concerned with the result of the promotion board and what the implications would be if I had managed to scrape through.

I was certainly the oldest and, possibly, the least apprehensive of the applicants who assembled in the foyer of the interview rooms on the day of the selection board. The thought even crossed my mind that I’d been nominated so the Met couldn’t be accused of excluding older officers. I saw a lot of female candidates, at least as many as the men, which didn’t come as too much of a surprise given the effort the Met
was making to put right its poor record on equal opportunities. We were all in best bib ‘n’ tucker – smart suits or full uniform, depending upon our current role. I’d felt quietly confident at that point, even as I’d walked through the door to the final interview room.

But now that I was due to see our new Superintendent to hear the result, I didn’t really share Matt and Nina’s faith in me. My lack of operational experience as an Inspector had generated quite a few questions from the three senior officers on the selection board. And I was asked the inevitable question – a tough one to answer: Did I think that spending several years guarding the Royal Family and just one year as a Detective Inspector was sufficient to prepare me for the demanding role of a Chief Inspector?

I had given as good an answer as I could, but it was clear to me that the question was posed to expose my Achilles heel. I’d done well on my CID courses, but I knew as well as the board did that I’d only been fast tracked onto them due to my unusual situation. My interviewers didn’t mention the six-week absence I’d taken to be treated for stress. But they knew about it – it was on my file – and I wasn’t so naive as to think it wouldn’t figure in their deliberations.
Our new Superintendent, Ron Cutts, was waiting as we arrived back at the office. He waved me over and, as I stepped into his office, he shut the door behind me and invited me to sit. My stomach felt hollow. Long in the tooth and with a long history of selection systems and examinations behind me, yet I still felt nervous.

He got straight to the point. ‘How do you think the board went?’
I shrugged and screwed up my face a little. I was about to speak when he raised a hand to silence me.
‘Sorry … not a lot of point in beating about the bush. That was a pointless question.’
‘Not good news, then?’ I asked.
‘Not for you, no. I’ll admit to some relief you’ll be staying with us for a while longer, though.’

‘Can’t say I’m too surprised. I was the oldest by far and my CV kind of let me down.’

Cutts flicked through a file on his desk, appearing to re-read what had been said about me. ‘Feedback was good: says if there had been more places you’d have been in with a shout. It suggests a posting where you can act up in the rank and then have another go.’
‘I bet they say that to everyone who dips out. What do you think?’
He took a deep breath. ‘If I’m honest, I think it’s not just your age and length of service that work against you.’
‘Something else?’
‘Your history. Before I took command of this team, Mr Grahamslaw filled me in on what happened to you last year and how you ended up here.’
‘You think that influenced the board?’

He closed the file and placed it in a drawer. ‘I think you’re a damn good cop, Finlay, and it’s clear our Commander has your back. But, let’s just say there are people in the job who thought you should have been prosecuted.’

There was little more to be said. I extended my thanks and headed back to the main office.
Nina and Matt were in the corridor grabbing coffee and a cake from the tea-lady’s trolley.
Nina looked at me, expectantly. I guess my face told it all. ‘No good, eh?’ she asked.
‘Better luck next time, I guess.’ I did my best to look upbeat.
‘Not a chance. I had to sleep with all three of the board to get them to turn you down!’
I laughed. Matt laughed. Even the tea-lady laughed.
‘Well, at least you can enjoy the weekend,’ said Matt. ‘I’ve just had the DCI from Kilburn on the phone. They’ve been trying to catch up with Costas Ioannidis for months. Well pleased, he was, and he’s agreed to take over the enquiry. We’ve got a weekend off to enjoy some down time.’ 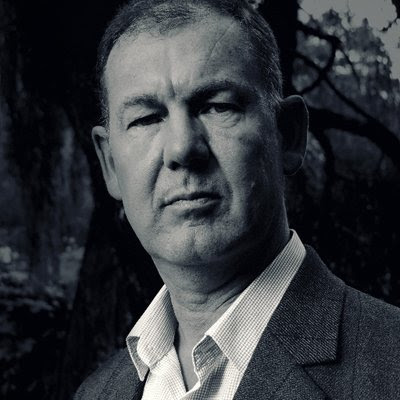 Matt Johnson served as a soldier and Metropolitan Police officer for twenty-five years. Blown off his feet at the London Baltic Exchange bombing in 1993, and one of the first police officers on the scene of the 1982 Regent's Park bombing, Matt was also at the Libyan People's Bureau shooting in 1984 where he escorted his mortally wounded friend and colleague, Yvonne Fletcher, to hospital. Hidden wounds took their toll. In 1999, Matt was discharged from the police with Post Traumatic Stress Disorder. While undergoing treatment, he was encouraged by his counsellor to write about his career and his experience of murders, shootings and terrorism. One evening, Matt sat at his computer and started to weave these notes into a work of fiction that he described as having a tremendously cathartic effect on his own condition. His bestselling thriller, Wicked Game, which was shortlisted for the CWA John Creasey Dagger, was the result. Deadly Game and now End Game, the final book in the Robert Finlay series, once again draw on Matt's experiences and drips with the same raw authenticity of its predecessor.