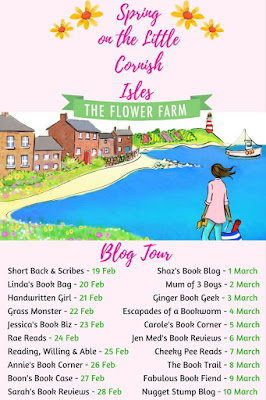 With this terrible weather we are all having at the moment, what better time to sit and read a little bit about Spring in the West Country! I'm delighted to be a part of Phillipa Ashley's Blog Tour for Spring on the Little Cornish Isles.

Twenty minutes later, Adam threw the rope around the bollard on the small quay at St Saviour’s and secured it to the cleat. Jess helped Gaby off the boat and up the steps with her bag. The quay rose out of a small rocky outcrop at the bottom of the island road. Deeper water lapped one side, while the other looked out over creamy sand, currently covered in a foot or so of translucent peppermint sea.
Gaby looked around her and shook her head in wonder. ‘Wow. It’s so beautiful. I’ve seen pictures on your website of course, but I hadn’t imagined the real thing would be anything like this. It’s still England, but as if England were set in the Greek islands.’
Jess followed Gaby’s gaze towards the long sweep of white sand that ran half the length of the island and the myriad rocky skerries dozing in the lagoon between the main isles. St Saviour’s, like Gull Island and its neighbour Petroc, were all clustered around the shallow ‘pool’ with only lonely St Piran’s lying to the west across a deep-water channel.
‘It is lovely on a day like this,’ she said, quietly proud of her home.
‘Not so lovely when you’re trying to get the mail delivered in a howling gale or when the fog drops down,’ said Adam.
Gaby turned to him in surprise. ‘Oh, you’re a postman, then?’
‘Yes. I deliver the smaller islands’ mail.’
‘You must have the best post round in Britain.’
He grinned. ‘You can say that again.’
Jess squeezed his hand behind Gaby’s back. ‘Better get going. Will’s going to be … um … eager to welcome you too.’ She mentally crossed her fingers that her brother was in. ‘We can walk to the farm from here.’
Despite Gaby’s protests, Adam carried her case and the shopping. Jess had given up trying to stop him long ago. She took the chance to chat to Gaby as they trudged up the slope from the quay and onto the road that ran along the spine of the island.
With Adam a few feet ahead, Jess slowed her pace to allow Gaby to take in her surroundings. She stared out over the Atlantic and spoke softly, almost reverently.
‘I must go down to the sea again, to the lonely seas and the sky
And all I ask is a tall ship and a star to steer her by.’
Jess waited, a little taken aback.
Gaby turned towards her with a smile. ‘Sorry, couldn’t resist. That’s from Sea Fever by John Masefield. Do you know it?’
‘I think I might have heard of it but I’m not that great on poetry to be honest,’ Jess replied, quietly amused and also, if she was honest, thinking the lines were very apt for the way she often felt about the spectacular spot she lived in: drawn to the sea.
‘The view is incredible,’ said Gaby, echoing Jess’s own thoughts.
‘Yes, you practically see most of Scilly from up here and Land’s End too on a clear day. Look, there it is.’ Jess pointed out a shadowy but unmistakable hunk of land on the horizon to the east.
‘Wow,’ said Gaby. ‘Exactly how far is it?’
‘Twenty-eight miles, though it may as well be Canada on some days. The fog can roll in and you can’t see the sea at all, let alone the mainland,’ said Adam, waiting for them.
‘Wow. That must feel like being cast adrift in the middle of the ocean.’
Jess felt a quiet sense of pride in Gaby’s awe. ‘It can be but on days like this, it’s gorgeous. And actually, we’re here.
Posted by Boon's Bookcase at 07:00