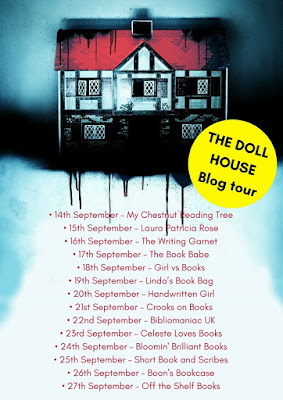 It' my turn on the Blog Tour for The Doll House which is the first novel by Phoebe Morgan, who actually works at Harper Collins! I have a guest piece from Phoebe herself for you.

My top 3 TV Shows that can help you become a better writer
1.      The Affair – this is my number one favourite show and it really helps with writing as well. It’s all about perspective and memory – so you get to see the love affair that develops between Noah and Alison from both sides. For the first season, each episode is split between the characters, and everything shifts around so you see the same scenes happening but told in a slightly different way. I found it really fascinating as we do all remember things very differently, which is an idea I explore in The Doll House too. You’re never quite sure who is telling the truth – but the premise of the show is that they both are, they’re telling their truths. The show raises the idea that truth is a changeable concept rather than written in stone, which I think applies to so many great novels as well. The way characters see things can depend upon so many things – their previous experiences, their ultimate goals, their conflicting desires. None of us are black and white and this show really makes the most of that to brilliant, tense, moving effect. Plus, the Fiona Apple song in the opening credits is great.
2.      Happy Valley – if you’re looking for well-written, tightly plotted crime, this is the TV show to watch. I am desperately waiting for the third season, but the first two (starring Sarah Lancashire) have been excellent. Lancashire is a police officer, and a very human one at that – she is still grieving for her daughter, and she’s doing her best to help her ex-alcoholic sister. Plus, she has to track down a psychopathic rapist. You know, all in a day’s work! The storyline follows the (it has to be said, very attractive) criminal Tommy Lee Royce, played by James Norton, and the thing that makes me really love this show is that you can see immediately how tightly it’s been plotted. It has the A, B and C strands totally nailed down, and I found it very helpful when thinking about narrative, how to join plot points together and how to build tension from episode to episode (or chapter to chapter) too.
3.      Catastrophe – this show starring Sharon Hogan and Rob Delaney is hilarious. A fresh twist on the accidental pregnancy, they meet as middle-aged forty-somethings and Sharon gets pregnant during a very brief three-day fling when American Rob is in the UK on business. They wrote the show too, and the writing is fresh, funny and realistic, portraying a relationship in all its glory, complete with arguments, make-up sex and taking the bins out. The actors have great chemistry, and they paint a really vivid portrayal of adults who, despite seeming all grown up, actually still don’t know what on earth they’re doing in their lives. When the pregnancy comes along, they’re forced to make big decisions, and I love this show because it really makes you think about the reality of relationships. Relationships can sometimes be very hard to write, and I found this a really nice insight into a couple who sometimes hate it each other, sometimes love each other, and sometimes just don’t care either way. Every line deserves its place in the show and that’s how your writing should be too!

To  order a copy of The Doll House click here
Posted by Boon's Bookcase at 07:00