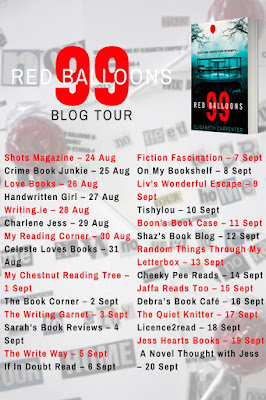 It's my turn on the Blog Tour for 99 Red Balloons. It's a psychological thriller debut by Elisabeth Carpenter. I have an extract for you today, but I can't wait to read this one!

How has using scissors become so difficult? My stupid hands. It has taken me nearly an hour to cut out twelve pictures. Of course, it didn’t help that the photos are so bloody small. The newspapers haven’t printed many pictures of Grace Harper’s family – they’re not as important as the little girl. But they’re important to me.
I’ve placed the grainy black and white ones – most of them duplicates – around the big picture of Sarah in the middle of the coffee table. It’s like looking at lots of little Sarahs – the likeness is incredible. Is it the sickness clouding my thoughts – making me see things that aren’t there? No. It can’t be.
The photo in the middle is the clearest I have of Sarah. We didn’t bother taking photographs after Zoe went missing – why would we? There was no happiness in this house after that – no good news to celebrate and document. With each year Zoe was absent, Sarah faded further away. I blamed the booze, but perhaps using drink was how she lasted so long without her daughter.
She only started drinking after Zoe was taken. I don’t think she was depressed as such, just so desperately sad. I can’t imagine my own child being taken from me like that, the not knowing where she is. It’s bad enough when it’s your granddaughter – but your very own daughter who’d grown inside you. The thought is horrific.
I get up from the settee, using the coffee table as a crutch. I’m so tired: mind-tired, body-tired. Why am I still living? If I were still a religious person, I’d believe I was being tested, but I left God behind years ago – or did God leave me? I keep wondering what I did so terribly wrong in the past to make everything turn out like this, but I can’t think of anything. All those petty little things I made up in confession as a child: thinking bad thoughts about my parents, not helping with chores. Maybe these weren’t the sins they were looking for,because now I question my very being. Perhaps I just wasn’t good enough as a mother.
In the kitchen, there’s a bottle of sherry, half-empty, from a Christmas too long ago. How long does that stuff last? It’s behind cans of prunes, peaches, and a little pile of tinned pies. Ron loved those pies, but I can’t stand them. I don’t know why they’re still there. Comforting, I imagine.
The neck of the bottle is crusted. I put it to my nose: it still smells like sherry. It’ll be fine. I grab a tiny glass from the cupboard and take it into the front room. I’ve never been a drinker; never had more than a tot at Christmas. I’m usually in bed by seven – do people drink in the evening to quash the loneliness?
I land further from the table than I thought and have to shuffle with the bottle and glass in my hands. If anyone could see me, they’d think me ridiculous, a lush. The lid grates on the crust as I unscrew it. I hold up the glass after it’s filled. It still looks like sherry. It still tastes like sherry – or what I remember sherry to taste like.
It doesn’t take long to feel its heat. A fake warmth, but a warmth nonetheless. That’s why this stuff is evil. I stroke Sarah’s cheek on the photograph. My poor darling girl.
I refill my glass and take another sip. I feel a calm I haven’t felt in years. I pick up her photo and hold it to my chest. I close my eyes. I often talk to her in my head. I used to speak out loud in case her spirit, her essence, could hear me, but the silence that followed was too much.
I miss you, Sarah.