The People at No. 9
by
Felicity Everett
Blog Tour 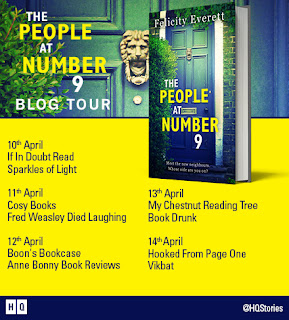 
Hi. Thank you so much for agreeing to answer some questions on my blog about your writing.

Firstly, please could you tell readers a little about yourself?

Hi Julie, thanks for inviting me to your blog. I am a middle-aged, married Mum of four, the youngest of whom has just flown the nest. I studied English Literature at Sussex University where I met my husband Adam. Work took us to London, where we lived for twenty-five years, and raised our family in a street not unlike the one I describe in my new novel The People at Number 9. I worked for a children’s publisher for ten years, writing and editing around twenty works of fiction and non-fiction and then, as family life got more demanding, I went freelance and published another four children’s books before collapsing in a heap! After a couple of years out, finding myself effectively unemployable, I decided I had nothing to lose and might as well have a crack at writing adult fiction, as I had always wanted to give it a go. I enrolled in a creative writing course at Goldsmith’s University, and after producing the inevitable bottom-drawer prototype, I published my first novel The Story of Us in 2011. By the time it came out, Adam’s work had taken us to Melbourne, where I spent four wonderful years. I had plenty of time at my disposal, and put it to good use, writing The People at Number and work-shopping it with the Melbourne writer’s group I had joined. We came back to the Uk three years ago, moving to a cottage in the Gloucestershire countryside, which is idyllic and a little bit spooky.

I can remember saying I wanted to be a writer when I was at primary school, but I never really thought it was an option. Even when I was writing children’s books, I didn’t think of myself as a writer, with a capital W, just someone who worked in publishing. So it wasn’t until I published my first adult novel, that I really admitted to myself that a writer was what I had become. I still have trouble saying it when I meet people. I want to pinch myself.

I have only ever worked in publishing, so I suppose you could say I was a writer from the get-go, although writing advertising copy promoting medical textbooks such as ‘Surgery of the Anus Rectum and Colon’ is hardly the stuff that dreams are made of! After that I worked for Usborne publishing, writing children’s books, which was great fun in its own right as well as a useful apprenticeship for writing my novels. Some of the best jobs I’ve had were as a teenager and student – I worked as a theatre usherette, and got to see lots of plays for free, which was a great foundation for writing. I also did a brief stint working as a ground hostess at Manchester Airport, where I honed my diction on the public address system!

How do you carry out the research for your novels?

I don’t tend to do much research as I write well within the realms of my own experience and imagination. If I do need to check something, Wikipedia will usually suffice. My secret writing short-cut is to use Pinterest and Google Image as writing prompts when describing a scene or ‘dressing’ a minor character.

I find writing dialogue easy and I really enjoy it. I find out who my characters are by listening to them talk. I’ve always found description a bit more arduous, but I’m learning to love it and when it goes well, it gives me enormous satisfaction. Perhaps the hardest thing for me, is moving backwards and forwards in time, or having a character digress, during an internal monologue -maybe reminiscing about their child-hood, or some seminal event in their lives – before moving back to the here and now. Judging the length and tone of that kind of digression can be really tricky. The very best example of this I’ve ever read, if anyone is keen enough to look it up, is in a short story by Tobias Woolf called ‘Bullet in the Brain’ in which the writer pauses, in the millisecond that a bullet enters the brain of his protagonist, to recount the formative years of this character up to the moment of his death, going on for several paragraphs, before returning to the action at the end. It’s breathtaking.

I do most of my writing in bed, when I wake up in the morning. It works better if I sneak up on it. I don’t like to consider this a routine, as the idea of routine, to me, is a pressure. It has become one, though, by default. I used to think I needed a special writing place – ideally a picturesque shack in the garden or a monastic cell. Actually, I write best with the noise of family in the background and a sense of being connected, but simultaneously disconnected from life going on around me.

I like to read the kind of books I am striving to write. That is, contemporary, realist novels about the politics of family and relationships and the internal dramas of the human heart. I read the occasional thriller, but on the whole I find the most exciting twists and turns come from people’s real passions and contradictions and the good and bad choices they make. For me, character is plot. The best exponents I know of this sort of fiction at the moment include Jonathan Franzen, Colm Toibin, Anne Enright, Elizabeth Strout and Marilynne Robinson. I am also a massive fan of American short stories and highly recommend The New Yorker’s fiction podcast. I’ve discovered some wonderful writers that way.

Could you tell the readers a bit about your latest book?

My latest book The People at Number 9 is a cautionary tale about a couple-crush between to sets of very different neighbours in a London suburb. Sara and Neil are ordinary down to earth pair with two kids and perfectly happy, if humdrum existence, whose lives are turned upside down by the arrival of some new neighbours, Gavin and Lou – arty bohemian and intriguing. The foursome bond, despite their differences, and before long, Sara in particular, has become so obsessed with her new friends that she has started to reshape her life and that of her family in their image. But as their new friends make more and more demands on them, Sara and Neil will discover that every lifestyle choice comes at a cost, and sometimes its not one worth paying.

Which of your characters would you most like to be and why?

The character I would most like to be is a minor character called Carol. She is seen by my main protagonist Sara as nice, but dull, and for a lot of the book, she is scorned in favour of the much more glamorous Lou. Carol is very straight and even a bit of a snob, but she’s a good person at heart and essentially, she is pretty content with who she is. That’s why she appeals to me.

Is there anything else you would have liked to be asked?
Maybe, ‘Who is my ideal reader?’

And the answer would be a well-read and quite stroppy friend who would pay me the compliment of reading critically and being honest about the strength and weaknesses of my novel. She’d have to be tactful, mind you, or I wouldn’t ask her round again!

Thank you so much for your time in answering my questions.
Thanks for asking me.