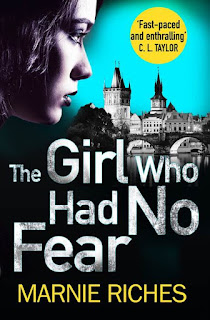 I'm delighted to be a part of the Blog Tour for The Girl who Had No Fear, the next instalment of the George McKenzie series. I have an extract for you and I can't wait to read this one to see what's in store for George!

‘Pull him from the water,’ Van den Bergen said, standing beneath the golfing umbrella in a vain attempt to shield himself from the torrential spring rain. Shifting from one foot to another at the canal’s edge, he registered that his toes were sodden where the rainwater had started to breach the stitching in his shoes. Damn. His athlete’s foot would almost certainly flare up. George would be on his case. That much was certain. ‘He looks rough, boss,’ Elvis said at his side. Standing steadfastly just beyond the shelter of the umbrella. Water dripping off the end of his nose and coursing in rivulets from the hem of his leather jacket, the stubborn idiot. Van den Bergen glanced down at the bloated body in the canal. Now that the frogmen had flipped him over, he could see that the white-grey skin of the man’s face was stretched tight; that his eyes had taken on a ghoulish milky appearance. There were no ligature marks around his neck, just visible as its distorted, waterlogged flesh strained against the ribbed collar of his T-shirt. No facial wounds. There had been no obvious blows to the back of the head, either. The only visible damage was to the man’s arm, which had been partially severed and now floated at an unlikely angle to his body. The torn flesh wafted in red fronds like some strange soft coral in the brown soup of the canal water. ‘It was a bargeman that found him, wasn’t it?’ Van den Bergen asked, picking his glasses up at the end of the chain that hung around his neck. Perching them on his triangular nose so that he could read the neat notes in his pad. ‘He was moving moorings round the corner from Bilderdijkgracht to Kostverlorenvaart, and the body emerged when he started his engine. Right?’ Elvis nodded. Rain, drip-dripping from the sorry, sodden curl of his quiff. ‘Yep. That’s what he said. He had pancakes at the Breakfast Café, nipped into Albert Heijn for milk and a loaf of bread—’ ‘I don’t want to know the bargeman’s bloody shopping list, Elvis,’ Van den Bergen said, belching a little stomach acid silently into his mouth. ‘I’m trying to work out if our dead guy’s arm was severed in the water by accident by the blades on the barge’s engine or as part of some fucked-up, frenzied attack by a murderous lunatic with a blunt cheese slice and an attitude problem. I’ve had enough nutters to last me a lifetime.’ ‘I know, boss.’ Elvis sneezed. Blew his nose loudly. Stepped back as the frogmen heaved the waterlogged corpse onto the cobbled edge of Bijlderkade. ‘This looks like it could just be some guy got drunk or stoned or both and stumbled in. Maybe he was taking a piss and got dizzy. Unlucky.’ He shrugged. Still holding the golf umbrella over him, Van den Bergen hitched up his raincoat and crouched by the body. Watched the canal water pour from the dead man’s clothes back to its inky home. ‘No. I don’t buy it. We’re not that lucky. It’s the fourth floater in a month. All roughly in the same locale. We normally get ten in a year, maybe.’ He thumbed the iron filings stubble on his chin. Was poised to run his hand through the thick thatch of his hair, but realised Marianne de Koninck would not thank him if he contaminated her corpse with white hairs. ‘What do you make of this, Elvis?’ he asked, staring at the dead man’s distorted features. He stood, wincing as his hip cracked audibly. But Elvis was speaking into his mobile phone. Almost shouting to make himself heard above the rain that bounced off the ground and pitted the canal water like darning needles being flung from heaven. Nodding. He peered over at the Chief Inspector. Covered the mouthpiece. ‘Forensics are three minutes away,’ he said. ‘Marianne’s with them.’ Van den Bergen nodded. ‘Good. I don’t believe in coincidence. Something’s going on in my city. I don’t like it one little bit and I’ve got a nasty feeling this is just the tip of the iceberg.’