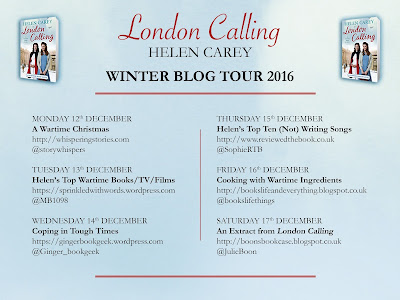 I think it's general knowledge by now that I do love a Family/London saga and by the looks of this one by Helen Carey, I am going to thoroughly enjoy this one! I have an extract for you today, but am hoping to have a review for you very soon.

Prologue
12 December 1942
With considerable relief, Molly Coogan pulled her cloak round her, checked that her nurse’s cap was pinned on securely, ran down the last few stairs and crossed the dimly lit lobby towards the heavily sandbagged doors.
Her hand was already on the handle when she heard someone speak behind her.
‘I wouldn’t go out there if I was you.’
The voice was portentous, almost gleeful in its gloomy menace, and Molly turned to see one of the hospital porters pinning a poster up on the wall next to the empty reception desk.
‘That sounds ominous,’ she said. ‘Why not?’
It struck her suddenly that the whole lobby was unusually empty. Visiting hour was long past, but there were normally a few staff coming and going. She knew it wasn’t an air raid. Even in the depths of the Wilhelmina septic wards she would have heard the sirens. She had heard them often enough. And the planes that followed.
Much of south London had been smashed to smithereens by Nazi bombs over the last couple of years. But the Wilhelmina Hospital had been built to withstand the Zeppelin raids of the Great War. It was proving equally effective against the Luftwaffe, despite its proximity to tempting targets like the Clapham Junction rail interchange and the Battersea power station.
In her darker moments Molly sometimes wished that the Wilhelmina would suffer a direct hit and put everyone out of their misery. Throbbing and humming gently, insulated from the real world by its emergency generators, it was like some sinister old submarine. And she hated it. She hated the boarded windows, the hushed gloom, the ghastly competing scents of sepsis and iodine, the dogmatic senior nurses and the smug, complacent doctors. Most of all she hated the constant presence of death.
She didn’t know how much more she could take. Even tonight . . . She stopped and shook her head.
‘Why not?’ she asked again. ‘What’s going on outside?’
‘Fog,’ the porter said.
He took a spare drawing pin out from between his teeth and stood back to admire his handiwork. Even in the muted light, Molly could see that it was a picture of Winston Churchill.
‘Fog?’ Molly repeated. ‘I’m not scared of a bit of fog.’
But then she hesitated. It was an excuse not to go up to the Flag and Garter. A legitimate excuse. She could go back to the nurses’ home instead, crawl into bed and block out the day, block out the thought of a young girl dying of septic infection only ten days after pricking her finger on a rose bush.
‘That’s easy to say, but it’s a right old pea-souper tonight,’ the porter said. ‘Just like the old days.’
Molly felt torn. She was dog tired. But she had promised her friend Katy Frazer that she would help up at the pub.
‘You can’t see your hand in front of your face,’ the porter added.
Wondering what other platitudes he would come out with, Molly took a step forward to read the slogan under Winston Churchill’s face. We will go forward together.
That was all very well for him, Molly thought. Going forward for old Winnie probably meant being tucked up in front of a log fire somewhere nice and safe with a big fat cigar in his hand and a map of the world on his lap. But for her it meant struggling up to Lavender Road to spend the evening behind the bar in a noisy, smoky pub.
She nodded an unenthusiastic good night to the porter and pushed out through the heavy doors. She had to go. It was her last chance to give Katy a hand. She was back on nights again tomorrow, and by next weekend, fingers crossed, she would be at the maternity hospital in Croydon, starting midwifery training.
It wasn’t much of a change. There’d still be scrubbing and cleaning and starchy old ward sisters to contend with. But at least she would be ushering life into the world rather than out of it. And if nothing else, it would get her away from the Wilhelmina, from London, from Lavender Road. And from Katy and her lovely Canadian husband Ward Frazer.
She would try to make a fresh start. It would be a wrench. A terrible wrench. But she knew it had to be done. For the sake of her sanity.

To order a copy of London Calling click here