No Turning Back
by
Tracey Buchanan
Blog Tour 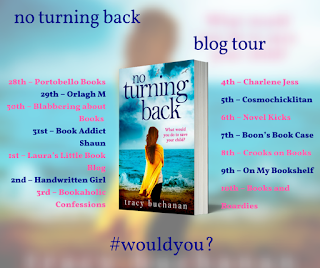 When radio presenter Anna Graves and her baby are attacked on the beach by a crazed teenager, Anna reacts instinctively to protect her daughter.
But her life falls apart when the schoolboy dies from his injuries. The police believe Anna’s story, until the autopsy results reveal something more sinister.
A frenzied media attack sends Anna into a spiral of self-doubt. Her precarious mental state is further threatened when she receives a chilling message from someone claiming to be the ‘Ophelia Killer’, responsible for a series of murders twenty years ago.
Is Anna as innocent as she claims? And is murder forgivable, if committed to save your child’s life…? 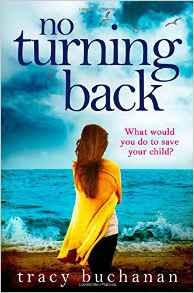 I was so eager to read this new book by Tracy Buchanan as I have read My Sister's Secret and loved it, so am delighted to be a part of the blog tour for No Turning Back.

Anna Graves is pushing her daughter Joni in her buggy along the seafront when she is confronted by Elliot Nunn. He is behaving very threateningly towards her and Joni and pulls out a knife. In a split second Anna tries to defend herself and Joni from her attacker and stabs him with a comb. He falls to the ground and dies from his injuries.

Anna works at the local radio station and it doesn't take long for the news to get out and instead of Anna debating the news on her radio show, Anna becomes the news. It doesn't help when it also appears that Anna has had a brief fling with her co-presenter Nathan. Anna's estranged husband Guy is enraged and insists Joni stays with him. Anna feels her world is falling apart and this is just the beginning.......

With Elliot's family on her back trying to find answers as to why Anna murdered their son, her own mother and brother so hostile towards her that the only person she feels she can confide in is her grandmother. Even the police don't seem convinced that Anna is innocent.

Meanwhile, Anna is still trying to come to terms with the sudden death of her father, a man she always looked up to and admired. This and the emails she has been receiving from someone who is claiming to be The Ophelia Killer. This was someone who killed teenage boys over 20 years ago, but suddenly stopped until recently.

This is a gripping and fast moving story and you can't help feeling sorry for Anna. She is trying to convince everyone she is innocent, but always seems to be in the wrong place at the wrong time.

A real page turner, right until the very last page. I for one am useless at whodunnits, but even I didn't have a clue as to who the killer was!!

Thank you to Avon Books UK for sending me a copy of No Turning Back for review.