I'm delighted to be hosting the Blog Tour for Learning to Fly by Jane Lambert. I have an extract and guest post for you......enjoy! 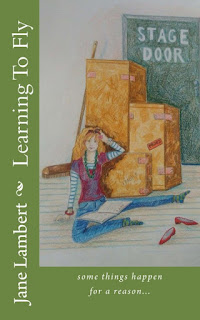 Forty-year-old air stewardess Emily Forsyth has everything a woman could wish for: a glamorous, jet-set lifestyle, a designer wardrobe and a dishy pilot of a husband-in-waiting to match. But when he leaves her to ‘find himself’ (forgetting to mention the bit about ‘… a younger girlfriend’), Emily’s perfect world comes crashing down. Catapulted into a mid-life crisis, she is forced to take stock and make some major changes. She ditches her job and enrols on a drama course in pursuit of her childhood dream, positive that, in no time at all, she’ll be posing in Prada on the red carpet and her ex will rue the day he dumped her – right? Wrong! Her chosen path proves to be an obstacle course littered with odd jobs and humiliating auditions; from performing Macbeth single-handedly at Scone Palace to chauffeuring the world’s top golfers at St Andrews – and getting hopelessly lost.
If she is to survive, she must learn to be happy with less and develop a selective memory to cope with more than her fair share of humiliating auditions. She tells herself her big break is just around the corner. But is it too late to be chasing dreams?

Reasons for and against giving up the glitzy, glamorous world of flying:

Jeddah, Saudi Arabia
‘Hayyaa’ala-s-salah, hayya ’ala-l-falah …’ came the haunting call from the mosque across the square, summoning worshippers to evening prayer. It was almost time to meet up with the crew to mosey around the souk — again. Too hot to sunbathe, room service menu exhausted, library book finished, alcohol forbidden, and no decent telly (only heavily edited re-runs of The Good Life, where Tom goes to kiss Barbara, and next minute it cuts to Margo shooing a goat off her herbaceous border), the gold market had become the highlight of my day.
Donning my abaya (a little black number that is a must-have for ladies in this part of the world), I scrutinised myself in the full-length mirror. No wonder Nigel was leaving me; far from looking like a mysterious, exotic, desert queen, full of eastern promise, it made me resemble a walking bin liner.
I read the fire evacuation drill on the back of the door and checked my mobile for the umpteenth time, then cast my eyes downwards, studying my toes. I know, I thought, giving them a wee wiggle, I’ll paint my nails. It’s amazing what a coat of Blue Ice lacquer can do to make a girl feel a little more glamorous, and less like Ugly Betty’s granny.
As I rummaged in my crew bag for my nail varnish, there, stuffed in between Hello! and Procedures To Be Followed in the Event of a Hijack, was an old copy of The Stage (with another DO NOT PHONE HIM!! Post-it note stuck to it). Idly flicking through the pages, my eyes lit up at the headline:

DREAMS REALLY CAN COME TRUE.
Former computer programmer, Kevin Wilcox, 40, went for broke when he gave up his 50k-a-year job to become a professional opera singer. ‘My advice to anyone contemplating giving up their job to follow their dream, is to go for it,’ said Kevin, taking a break from rehearsals of La Traviata at La Scala.

That was my life-changing moment; an affirmation that there were other people out there — perfectly sane people, who were not in the first flush of youth either, but were taking a chance. That’s what I’d do. I’d become an actress, and Nigel would see my name in lights as he walked along Shaftesbury Avenue, or when he sat down to watch Holby City, there I’d be, shooting a doe-eyed look over a green surgical mask.
‘What a fool I was,’ he’d tell his friends ruefully, ‘to have ever let her go.’ Hah!
But revenge wasn’t my only motive. Faux designer bags and expensive makeovers were no longer important to me. I wanted the things that money can’t buy: like self-fulfilment, like the buzz you get on opening night, stepping out on stage in front of a live audience. Appearing through the galley curtains, proclaiming that well-rehearsed line, ‘Would you like chicken or beef?’ just wouldn’t do any more.
Inspired, I grabbed the telephone pad and pen from the bedside table, and started to scribble furiously.

Dear Emily,
Following your recent audition, we of The Academy Drama School are pleased to offer you a place on our one-year, full-time evening course.
We look forward to meeting you again at the start of the autumn term, details of which are attached.
Sincerely,
Edward Tudor-Barnes
Principal

Whey hey! It was reckless, irresponsible and utterly mad, but I was tired of being sensible or doing things simply to please others. Ever since I’d played the undertaker in a school production of Oliver! I’d wanted to act. Okay, so I may be running twenty-five years late, but now nothing and no one was going to hold me back. 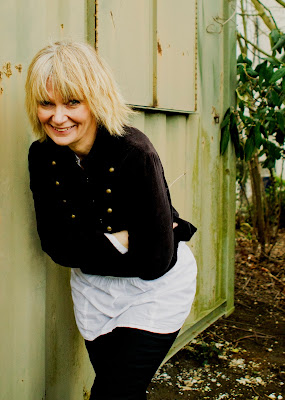 Jane studied languages at Stirling University then taught English at Hetzendorf Fashion School in Vienna.
On returning to the UK she joined British Caledonian Airways and visited some amazing, far-flung places she’d never heard of before.
However, she’d always dreamed of being an actress and at the age of 34 decided it was now or never. She sold everything to pay for drama school. People thought she was mad but she’s a great believer in seizing the day.
She has appeared in “Calendar Girls”, “The Curious Incident of the Dog in the Night-time” and “Deathtrap” in London’s West End. Her journey has been a rollercoaster ride but she wouldn’t change a thing. These crazy, amazing experiences provided the inspiration for “Learning To Fly” and its sequel, “Marriage, Mafia & Mozzarella”, due to be published next year.