The Years of Loving you by Ella Harper Blog Tour 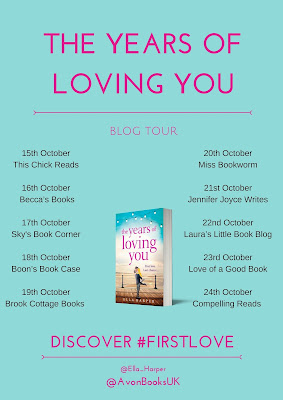 I am delighted to be a part of this blog tour and although I haven't had a chance to read the book yet, it is way up on my TBR pile! As a taster to keep you going I have an extract for you. 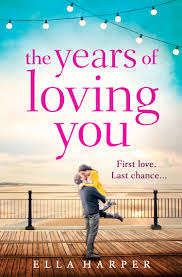 Ed headed straight for the window as the girl called Molly slipped outside. He followed her, knowing he had the perfect excuse in his hand should he need it; a sneaky fag was useful in so many ways. As a result, he was taken aback when Molly turned and eyed him suspiciously.
‘Are you following me?’
Ed lit his cigarette suavely but spoilt it by almost burning his fingers when he snapped his Zippo shut. ‘Shit. Er, might be. Molly, isn’t it?’
‘You know my name.’ She raised her eyebrows in a ladylike fashion. He was handsome. And he knew it. She wasn’t sure if she liked that. Obviously Molly under­stood that everyone had a mirror – it was more that she preferred confidence that came from achievement, not looks. ‘You’re following me and you know my name. There are laws against that, you know.’
‘I’m having an innocent cigarette and a friend told me your name just now. Hardly grounds for arrest, surely? I’m Ed, by the way.’
‘Hi. I’d tell you my name but clearly you already know me.’
Close up, Ed found himself drawn to Molly’s eyes. They were cat-like, shrewd. Brown. No, dark blue – an unusual shade that no doubt earned her compliments aplenty. From lesser mortals. Ed would need to come up with something more original. This was a smart, eloquent girl who looked as though she might, with impeccable manners, coolly dismiss boys who bored her.
Ed sucked on his cigarette, feeling something spark inside him. He was tired of easy girls; Molly was already challenging him.
Out of the blue, Molly smiled. Was she mocking him? Ed felt unnerved, wrong-footed. He really needed to get a grip.
‘I’m not planning to get you arrested, no.’ God, but he was sexy. Molly checked out his mouth. Kissable, definitely. Hmm. How annoying. She hadn’t felt this attracted to someone at first glance before. Was this what everyone called ‘chemistry’?
Molly pulled herself together and gestured to his singed fingers. ‘But I do think you need to learn how to use a lighter properly. Otherwise everyone will think you’re a right nobber.’
Ed let out a shout of laughter. He’d never met anyone else who used his favourite insult before. He stared at Molly. She was on the short side but perfectly propor­tioned. She had that irresistible blend of slender, with tantalising curves in all the right places. Ed was willing to bet Molly worried about the size of her bum constantly. Molly might be a challenge, but he was confident he knew how her mind worked. To a degree. Because Ed could modestly acknowledge that he knew a fair amount about girls. He caught sight of her bum as she began to walk away from him and almost dropped his cigarette. Delectable. Rounded. Ripe. Bloody hell. Better than he’d imagined. Hang on; where was she going?
‘I’m off to do some stargazing,’ Molly said, as though she had heard his thoughts. She sincerely hoped he wasn’t looking at her bum. She always worried about it, stressed that it was a little on the large side. ‘I think if you carry on walking in that direction, you get to the beach, right?’ She began strolling but threw a glance over her shoulder. ‘Aren’t you coming, shadow?’

The Years of Loving You is published on 19th November.