Could Phoebe and Jack finally have put their troubles behind them? All is calm at Hendry’s toy store, and Jack’s mother has even developed a grudging respect for Phoebe. If Archie is serious about addressing his issues, then things are really starting to look rosy for the couple again. But when did Phoebe’s life ever go to plan? As they prepare for what should be the happiest day of their lives, fate decides to throw them yet another curve ball. What they face will test them to the limit, but Phoebe might just believe in miracles before it’s through. 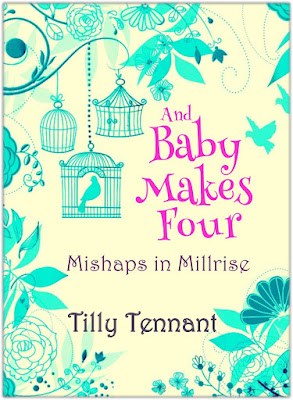 I think you can guess by the title what happens in the final part of this lovely series! I have thoroughly enjoyed reading how Phoebe and Jack’s relationship has grown and the obstacles they have had to face from the beginning, mainly Jack having to bring up his daughter Maria alone after her Mum dies and how they both cope with that.  Phoebe being introduced to Jack’s family (in particular his domineering mother!) who finds great satisfaction in giving Phoebe a hard time.

This final part seems to tie things up, which is great, because who doesn’t love a happy ending!

Jack’s brother Archie finally sees the error of his ways and sets out to become a better person and once Phoebe and Jack come to terms with the pregnancy, things go from strength to strength, to the point where Jack asks Phoebe to marry him!

So, not only does Phoebe have her pregnancy to deal with, she has her job to secure, planning a wedding, moving in with Jack……what could possibly go wrong!!!

Well done Tilly Tennant for a lovely series. I have loved reading about the characters and am quite sad it is ending now!


Thank you to JB Johnston at Brook Cottage Books for sending me the series to review.
Posted by Boon's Bookcase at 06:30