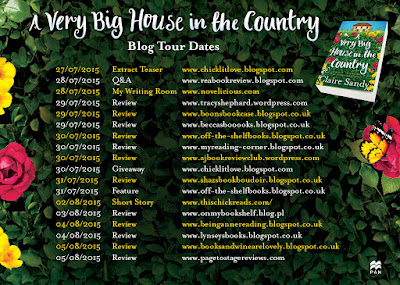 'Holidays are about surviving the gaps between one meal and another.'
For one long hot summer in Devon, three families are sharing one very big house in the country. The Herreras: made up of two tired parents, three grumbling children and one promiscuous dog; the Littles: he's loaded (despite two divorces and five kids), she's gorgeous, but maybe the equation for a truly happy marriage is a bit more complicated than that; and the Browns, who seem oddly jumpy around people, but especially each other.
By the pool, new friendships blossom; at the Aga door, resentments begin to simmer. Secret crushes are formed and secret cigarettes cadged by the teens, as the adults loosen their inhibitions with litres of white wine and start to get perhaps a little too honest ...
Mother hen to all, Evie Herreras has a life-changing announcement to make, one that could rock the foundations of her family. But will someone else beat her to it?

Review
A Very Big House in The Country is the story of three families who have never all been on holiday together before, but decide to hire a large country house in Devon with their children of all ages from babies to teenagers - what could possibly go wrong!!

Evie is married to Mike. I loved Evie, she was so easy going, never got stressed and aspired to be an author of raunchy novels. I must admit, it did make me laugh when she was reading what she had written - very Fifty Shades!! Mike, although a nice character, was very clingy and a bit needy due to his upbringing but they all seemed a really good family. Scarlett is their teenage daughter and so typically hates everything and everyone and doesn't want to be there at all!!

Evie's friends are the Ling-Littles' who are a very dysfunctional family with a baby they don't know how to look after and Clive has a son who is set to cause havoc!

Paula and Jon were the third couple to arrive at the house. Many things are brought out into the open regarding their relationship but Paula was an absolute nervous wreck! But what was so delightful about the author's writing, was that you understood why she was like that towards the end.

I can imagine this book turning into a comedy film as it was so full on and every character was different but as the book went on there were some real twists and turns. There were quite a few very funny situations and calamities, which by the end of the book, left me exhausted!!

Thank you to Francesca at Pan Macmillan for the review copy of this book.