The Day We Disappeared by Lucy Robinson 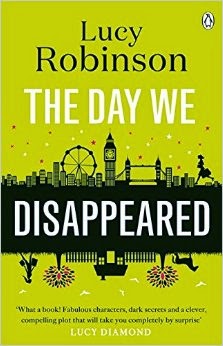 Annie has a secret. But if she's not going to tell, we won't either. It's a heart-breaking secret she wishes she didn't have - yet Annie isn't broken, not quite yet. Especially now there's someone out there who seems determined to fix her.
Kate has run away. But she's not going to tell us why - that would defeat the point of running, wouldn't it? It's proving difficult to reinvent herself, however, with one person always on her mind.
Scratch beneath the surface and nobody is really who they seem. Even Annie and Kate, two old friends, aren't entirely sure who they are any more. Perhaps you can work it out, before their pasts catch up with them for good . . .

Review
I had heard so many great reviews of this book that I just had to buy a copy and find out what all the fuss was about! I wasn’t disappointed. The Prologue alone got my heart racing and “the twist” that everyone kept talking about was exceptional and I admit, I had to go back and re-read a few pages as I thought I had missed something!!

I am not going to delve into the storyline too much because I just don’t want to give any spoilers, but it tells the story of Annie who loses her Mum at such a young age and how she has to cope with that growing up and how her world changes when she meets Stephen Flint, who seems too good to be true………

Then there’s Kate who is running away to start a new life in a riding stables even though she doesn’t know the first thing about horses! As you read you just want to know why and what she is running away from and why she is so nervous and agitated all of the time.

The way the story comes together is just brilliant. I won’t say any more than that, other than you will only find out if you read it as I am giving nothing away!!

This is my first Lucy Robinson book but if this one was anything to go by, it certainly won’t be my last!!