Wartime at Liberty's
by
Fiona Ford 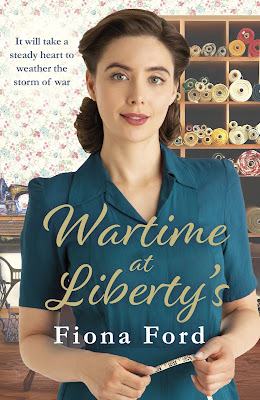 Review
This is the third in the Liberty series and I have loved all of them so far and this one was no exception.

In this instalment we follow Flo who is mourning the loss of her husband Neil. She is distraught as his last letter to her was not full of the love that they usually shared, but of disappointment that she had lied to him because she loved singing and went behind his back to sing in clubs with her aunt Aggie. Neil had bad experiences of his mother who was also a singer and so didn't want Flo to follow in her footsteps.

Flo's only saviour is her job at Liberty's and her work pals, who always rally around whenever anyone needs help and support.

She also forms a very good friendship with Henry Masters, who although is her superior, treats her like a friend and introduces Flo to a different kind of world by asking her to play piano at his little brother Stan's school and also introducing her to Celia, who would end up becoming more than a pal, she would happen to change Flo's life and turn it upside down!

It's only a matter of time before the past catches up with Flo and threatens her future, but will she be strong enough to fight the ghosts and break free?

This is yet another corker by Fiona Ford and I really look forward to catching up with "the girls". I know that there is another book coming at the end of the year and am so excited for that. I just hope that this series keeps on going as I love the Liberty Girls and they hold a special place in my "book heart".