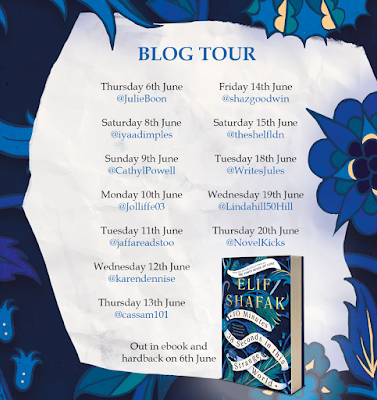 Thank you so much to Penguin for letting me kick off the Blog Tour for this book. Today, I have an extract for you, but this sounds such an interesting read that I am adding this one to my TBR pile and hope to get to read it sooner rather than later! Sit back and enjoy a teaser of this one!

Extract
Her name was Leila.
Tequila Leila, as she was known to her friends and her clients. Tequila Leila as she was called at home and at work, in that rosewood-coloured house on a cobblestoned cul-de-sac down by the wharf, nestled between a church and a synagogue, among lamp shops and kebab shops – the street that harboured the oldest licensed brothels in Istanbul.
Still, if she were to hear you put it like that, she might take offence and playfully hurl a shoe – one of her high-heeled stilettos.
‘Is, darling, not was . . . My name is Tequila Leila.’
Never in a thousand years would she agree to be spoken of in the past tense. The very thought of it would make her feel small and defeated, and the last thing she wanted in this world was to feel that way. No, she would insist on the present tense – even though she now realized with a sinking feeling that her heart had just stopped beating, and her breathing had abruptly ceased, and whichever way she looked at her situation there was no denying that she was dead.
None of her friends knew it yet. This early in the morning they would be fast asleep, each trying to find the way out of their own labyrinth of dreams. Leila wished she were at home too, enveloped in the warmth of bed covers with her cat curled at her feet, purring in drowsy contentment. Her cat was stone deaf and black – except for a patch of snow on one paw. She had named him Mr Chaplin, after Charlie Chaplin, for, just like the heroes of early cinema, he lived in a silent world of his own.
Tequila Leila would have given anything to be in her apartment now. Instead she was here, somewhere on the outskirts of Istanbul, across from a dark, damp football field, inside a metal rubbish bin with rusty handles and flaking paint. It was a wheelie bin; at least four feet high and half as wide. Leila herself was five foot seven – plus the eight inches of her purple slingback stilettos, still on her feet.
There was so much she wanted to know. In her mind she kept replaying the last moments of her life, asking herself where things had gone wrong – a futile exercise since time could not be unravelled as though it were a ball of yarn. Her skin was already turning greyish-white, even though her cells were still abuzz with activity.
She could not help but notice that there was a great deal happening inside her organs and limbs. People always assumed that a corpse was no more alive than a fallen tree or a hollow stump, devoid of consciousness. But given half a chance, Leila would have testified that, on the contrary, a corpse was brimming with life.
She could not believe that her mortal existence was over and done with. Only the day before she had crossed the neighbourhood of Pera, her shadow gliding along streets named after military leaders and national heroes, streets named after men. Just that week her laughter had echoed in the low-ceilinged taverns of Galata and Kurtulush, and the small, stuffy dens of Tophane, none of which ever appeared in travel guides or on tourist maps. The Istanbul that Leila had known was not the Istanbul that the Ministry of Tourism would have wanted foreigners to see.
Last night she had left her fingerprints on a whisky glass, and a trace of her perfume – Paloma Picasso, a birthday present from her friends – on the silk scarf she had tossed aside on the bed of a stranger, in the top-floor suite of a luxury hotel. In the sky high above, a sliver of yesterday’s moon was visible, bright and unreachable, like the vestige of a happy memory. She was still part of this world, and there was still life inside her, so how could she be gone? How could she be no more, as
though she were a dream that fades at the first hint of daylight? Only a few hours ago she was singing, smoking, swearing, thinking . . . well, even now she was thinking.
It was remarkable that her mind was working at full tilt – though who knew for how long. She wished she could go back and tell everyone that the dead did not die instantly, that they could, in fact, continue to reflect on things, including their own demise. People would be scared if they learned this, she reckoned. She certainly would have been when she was alive. But she felt it was important that they knew.
Posted by Boon's Bookcase at 06:30