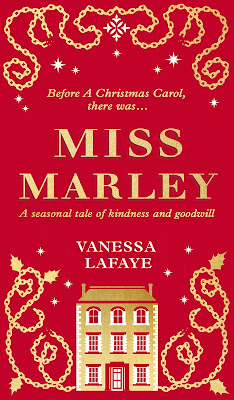 Every Christmas, without fail, I have to either watch or read A Christmas Carol and when I saw this book was being published, I just had to buy a copy. I managed to read the book in one day which is amazing for me, but I just couldn't put it down! You can read my review below about Jacob Marley and the reasons why he was to carry the chains around his neck for eternity, as in the story of Ebenezer Scrooge and A Christmas Carol...

Jacob and Clara Belle Marley were brought up in a huge house in London, but when their parents died, their Uncle sent them to the workhouse and sold the house to pay their father's debt and rather than stay, they ran away and took their chances on the streets of London.

They both struggle with finding food and warmth and Jacob never gives up hope of finding money to get themselves back on their feet.

Living on the streets takes it's toll on Clara and she gets a hacking cough that she never fully gets rid of and leaves a lasting effect on her lungs, which makes her weak throughout the rest of her life.

Clara finds work in the local toy shop and meets up with Tom who runs a tea stall. He has high ambitions of owning a chain of tea shops and asks the new company formed by Jacob and his friend  Ebenezer Scrooge for collateral to realise his dreams and then of marrying his beloved Clara.

This is a beautifully written tale and so believable as the beginning of the Scrooge & Marley story that I can really see it being a film as I could picture the scenes in my mind.

This story was written mostly by Vanessa Lafaye, but sadly passed away before she could complete her work and therefore the lovely Rebecca Mascull finished it and what a delight it is. I would thoroughly recommend this book to anybody who loves Christmas and the story of Charles Dickens' A Christmas Carol.