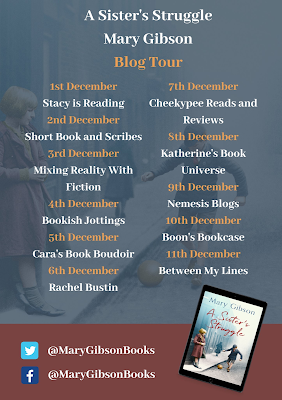 I'm absolutely delighted to be a part of the Blog Tour for Mary Gibson's latest novel, A Sister's Struggle, which is published on 1st December 2018 in hardback. In the meantime, I am honoured to have a guest post especially for Boon's Bookcase and I hope you enjoy reading it as much as I did. What makes this guest piece really personal is that I know most of the places that the author talks about and my Mum was born in Long Lane!

Thank you to the author for writing the guest post and to Vicky at Head of Zeus for adding me to the blog tour.

GUEST PIECE BY MARY GIBSON
STRUGGLES
My young heroine struggles with poverty, family loyalties, her conscience and her loves in my latest Bermondsey novel, set in the ‘hungry thirties’. But the central question of the novel is: who will win the battle for Ruby Scully’s heart?

Radicalisation is a word we hear a lot of these days, but there is nothing new about it. Poverty and youthful idealism have always been the perfect harvest fields and Bermondsey during the nineteen thirties was a prime example. It was a fascinating mix of mission field and battle field. From the soup kitchens of the South London Mission at the top of Tower Bridge Road to the little known ‘Battle of Bermondsey’ fought among the barricades of Long Lane, my idealistic young heroine, Ruby Scully, struggles to make a better life for herself, her family and friends. As she and a group of her young workmates at Crosse & Blackwell’s pickle factory fall variously in love with Methodism, Marx, Mosley and each other, it becomes clear that hearts and minds are the real battle field and it takes a terrible tragedy to reveal the truth behind each of their faiths and loves.

The novel opens with Ruby as a hungry twelve-year-old at the height of the depression. Her mother has died in childbirth and her father Dodge is a charming rogue but a terrible father. All the domestic burden of caring for her two brothers has fallen to Ruby and she keenly misses the presence of her mother. At near starvation point and desperate to get food for herself and her brothers, Ruby Scully joins the Methodist Mission, initially for the free breakfasts of bread and cocoa, but later as a true believer. Here she meets Ida, another hungry girl, who becomes her closest friend, but who finds her own faith in socialism. Although their ideas seem poles apart their friendship proves stronger than their faiths.

There is a pub in the Old Kent Road called the ‘World Turned Upside Down’ that appears in the book and I have used it as a sort of symbol for the general turmoil and upheaval that happens in my heroine’s life. I always like to connect Bermondsey, a thirteen hundred acre borough at the geographical heart of London, to wider national and international events of the time and then see how these ripple back to turn my characters’ lives upside down.

The 1937 Battle of Bermondsey gave me the ideal event to hang the story on. A year after Cable Street Mosley and his Blackshirts attempted to march through Bermondsey to hold an open air rally. But the locals refused to let them pass - coming out in their thousands and throwing up barricades along the route. Of course, my heroine is in the thick of it. One of her brothers has become a poster boy for the blackshirts, her fiancée is a Methodist missionary who forbids her to attend, and her best friends are socialists standing atop the barricades…what could possibly go wrong?

A SISTER’S STRUGGLE will be published by Head of Zeus in e book 1st December 2018, hardback February 2019 and paperback in May 2019 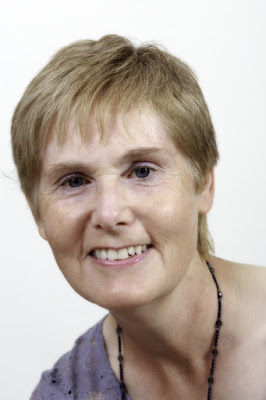 Mary Gibson was born and brought up in Bermondsey, South East London. After a thirty year career in publishing, she took the opportunity of early retirement to write a book of her own. Her début novel, Custard Tarts and Broken Hearts, was inspired by the lives and times of her grandparents in World War One Bermondsey. It went on to become a top ten Kindle best seller and was selected for World Book Night 2015. 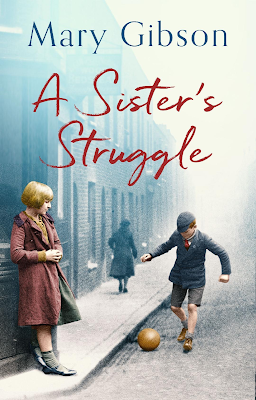 A young girl struggles to keep body and soul together in 1930s London, while her proud but spendthrift widowed father refuses to accept charity.

Ruby is always hungry, but she will go without if it means her young brothers can eat. 1930s Bermondsey might be called the larder of London, with its pie, pickle and jam factories, but for the poor working classes, starvation is often only a heartbeat away. When Ruby’s neighbour suggests she ought to go to the Methodist Mission for free food, Ruby knows her father will be furious, but that she has no other option.

It is a decision that will change the course of her life forever, split her family and in the end lead her to face a terrible choice between duty and a great love.