Today, it's my turn on the Twelfth Night at Eyre Hall Blog Tour and I have an extract for you. I think the cover is gorgeous and I hope to get round to reading it soon. This is the second in the series by Luccia Gray, but am assured it can be read as a stand alone. So sit back and enjoy a small piece of this period novel................

Michael had his back to the fireplace as we entered. He turned to look at Jane, and smiled, as he always did when he saw her, as if nothing had happened, as if he had just seen her yesterday. He moved towards us and she retreated, whispering his name once again.

“Diana, could we have some water. It’s been a terrible journey, and Jane is so very exhausted,” I said as I held her arm, sure she was about to collapse.

Michael rushed to the sideboard, poured some water from the decanter, and offered it to her. She stared at him, still motionless, so I took the glass and pressed the rim to her stunned lips.

Michael was standing too close to her. He was as handsome and striking as ever; more so in his navy uniform. He looked older and larger. His arms had grown sturdier; his face was tanned and rugged. He looked like a man who enjoyed giving orders instead of accepting them. He was as bolder and stronger as Jane was weaker and quieter. I never knew why he left, and now I had no idea why he had returned, although I supposed that his departure had been the cause of her melancholy mood.

My uncle had told me they were lovers. Unnatural, he called it, but I had seen love in the way their eyes chased each other’s movements at Eyre Hall. Did she tire of him and throw him out? Did he leave her? Why did she marry my uncle? I could understand my uncle’s reasons, but what did Jane gain from their union?

Jane was trembling, so I stood between them with my back to Michael, obstructing her vision, to give her some time to adjust to the surprise of seeing him.

“Drink some water, Jane, please,” I said as I pushed the glass to her lips.
“Are you well, Jane?” asked Diana.
“Yes, she’s all right,” I replied. “Just tired.”
“Well, you already know Michael, now Lieutenant Kirkpatrick. He has come with Captain Carrington and his wife. Captain Carrington is Michael’s sea captain. He was Charles’s last captain, too, on his final mission as Admiral of the Fleet. We are surrounded by valiant men today, are we not ladies?” Diana clapped her hands.

“They’re staying over Christmas. Would it not be wonderful if we could all spend Christmas together at Eyre Hall? I would love to have you come here, but of course, Thorpe House is not big enough. What with Adele, Mr. Greenwood and his son, as well as dear John, and naturally Mr. Mason, there is just no room here, dear sister. What do you say?”

I stepped forward and offered my hand to the captain who brushed his lips over my gloved knuckles as he gave me a lecherous smile, which instantly displeased me. His wife surprised me with a friendly hug. I finally offered Michael my hand. He bowed, but his lips did not touch my glove.

After greeting the captain and his wife, Jane turned to Michael. He held her hand longer than was necessary and pressed it against his lips with a smile. “I’m very pleased to see you again, Mrs. Mason.”

She stared back in silence, so I spoke. “Lieutenant, although we are pleased to see you, you must understand what a surprise it is. You left Eyre Hall suddenly, and we have had no information about your whereabouts in over a year. It was not a courteous way to leave your employer.”

“You are correct, Miss Mason. I do apologise to Mrs. Mason for not giving her enough notice of my leave, but my decision was sudden. My sister, Susan, was leaving Eyre Hall, and I too needed a change of employment. I came to see Admiral Fitzjames, because he had helped my father, too.” He turned to Jane. “I hope you can forgive me, Mrs. Mason.” 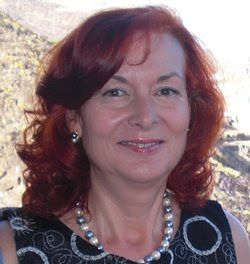 Luccia Gray was born in London and now lives in the south of Spain with her husband. She has three children and three grandchildren. When she's not reading or writing, she teaches English at an Adult Education Centre and at the Spanish National University.