Today, I am very pleased to host  the
P.S. Olive You
by
Lizzie Allen
Blog Tour!!

I really wish I had the chance to read this a couple of weeks ago when I was by the pool in Turkey! so I have included an extract for you to read as a little teaser............. 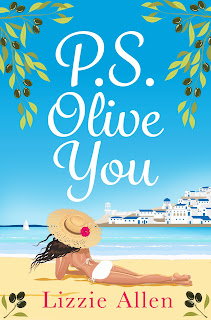 Our Chelsea crowd lived the highlife.  Yachts, summers in Saint Tropez, winters in Cloisters.   The mandatory second home in Majorca, Ibiza, the Dordogne with six bedrooms furnished by Jasper Conran.  Andrew had been lamenting the second-home-shaped-hole in our lives for some time, but the playgrounds of the jet-set were simply beyond our reach.

That’s when he came upon the epiphany of an island house in the Cyclades. The Marlborough set might do sumptuous, extravagant, opulent - but we could do interesting, quirky, surprising. Greece was gong bankrupt and Andrew said a fire sale was imminent. In the spring of 2011 you could already buy a four bedroom house with a sea view for half a million euros in Naxos.

Unfortunately we didn’t have half a million euros so we had to look further afield.  Two stomach-churning ferry journeys later he came upon Iraklia a tiny island with a permanent population of a hundred and fifty that swelled to a few thousand during the summer.  He’d been there on a business trip and came back waxing lyrical about the balmy evenings, the delicious honey and the fragrant herb covered hills. After he found it described in the Lonely Planet Guide as  ‘a sleeping Aegean gem’ our fate was sealed.

Three months later I was stuck in Iraklia in temperatures of thirty degrees with my face falling off.  The only fragrance I could smell was goat.

It’s the metalloproteinases that ruin the collagen in your skin.  Under normal conditions they’re there to assist and repair but excessive sun can make them spiral out of control. The UV also creates free radicals, which break the collagen down and leave it unable to regenerate itself. None of our Chelsea set went into the sun anymore after Nicole Kidman made it fashionable to go around looking like Nosferatu. The irony of this wasn’t lost on me.  We responded to our fear of aging (thus death) by going around looking like cadavers. I added luminosity to my corpselike appearance by applying a thick layer of Piz Buin factor fifty each morning on Iraklia and swaddling myself in scarves and shawls.  Locals frequently mistook me for the mummified body of Agios Ioannis and ran off screaming as I approached.

Iraklia was an unusual little place.  A couple of dusty mountains poking out the Aegean with only two villages and three small beaches.
One cash machine.

That was soon to change though because what most people didn’t know was that Iraklia was on its way to becoming to become a major tourist destination.  This privileged information came from the hallowed corridors of Brussels itself. As EU Commissioner for European Development, Andrew was responsible for doling out the pot of money set aside for promoting economic growth in underperforming areas of the union. Iraklia was a pet project of his and he knew exactly how much had been allocated for infrastructure schemes. As we drove around the island he proudly pointed out the manifestations of this benevolence – a school, a desalination turbine, a new road - as if he personally was the munificent St Nicholas that had bestowed such generosity upon the island.

More irksome were the stock phrases he reserved for dignitaries like Ajax Galitsis, his local fixer.

‘Education is self perpetuating’ was for when we passed a half-built school on the way to Panagia.

‘Water’s the source of all life’ was reserved for sun-downer cruises past the desalination turbine. 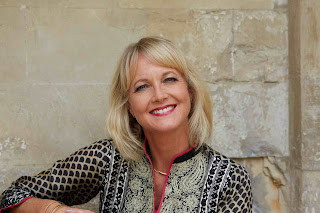 Writing is a third career for Lizzie as she previously worked as TV Producer and before that in PR.  She lives in London with her husband (who looks like James Bond!) and has a daughter at Edinburgh University studying history and history of art, and son who models for Elite International and is currently swanning around the world on a gap year.
Posted by Boon's Bookcase at 06:30